Ben Hawthorne is a character in the science fiction comedy television series Resident Alien. He is portrayed by Levi Fiehler.

Ben Hawthorne is the mayor of the small town of Patience. His somewhat flaky behavior has earned him the nickname "Snowflake" from Sheriff Mike Thompson. He is married to Kate Hawthorne and is the father of the boy Max Hawthorne, who can see through the alien Harry Vanderspeigle's human disguise. He had a standing therapy appointment with Sam Hodges on Tuesdays at 4 P.M. and demands that Vanderspeigle continue the arrangement as the new town doctor. Hawthorne is a people-pleaser. He wants to do right by everyone, but this often results his allowing people to run over him. He admits that he is scared of everything, though, when pressed, he can show a surprising reserve of courage.

Ben Hawthorne was present when the alien who had assumed the identity of the doctor Harry Vanderspeigle arrived at Patience's clinic to conduct on autopsy on Sam Hodges, the town doctor believed to be murdered. He stated that he knew it was hard on everyone but that a grief counselor was coming in to speak to all of them. His statement was immediately challenged by Sheriff Mike Thompson, who called him a "snowflake" and asked if the counseling was coming out of the town's budget. Hawthorne asked everyone to let him know when Hodges's widow, Abigail called, and Liv Baker, Thompson's deputy, replied that he would know because she gave her his number, saying that she didn't know how to tell someone her husband had died. At this, Thompson commented that he could give him her number, that he didn't care.

Hawthorne later recruited Vanderspeigle as the new town doctor. Although Vanderspeigle was reluctant, he laid his foot down, saying that he wanted what was best for the people of Patience. He also admitted that he had regular counseling sessions with Hodges and that he wanted continue them under Vanderspeigle. The two soon settled into a routine. Hawthorne seemed to appreciate Vanderspeigle's counseling sessions, but was unaware that the alien did not really care for him at all. He was also forced to deal with the behavior of his son, Max, who repeatedly claimed that Vanderspeigle was an alien. Neither he nor his wife, Kate, believed these claims, and it became a point of contention when Vanderspeigle suggested sending Max away to a special school in Georgia. This, and the ongoing investigation into Hodges's death, put pressure on Hawthorne, especially when he was forced to join a search of the lake, making him seasick.

His relationship with his wife, continued to deteriorate due to a number of factors. She expressed that she wished he would challenge her more, but he ended up taking it too far. Later, he expressed irritation when she invited two guests into their home, Sarah and Richard "Dick" Houston, who were secretly the government agents Lisa Casper and David Logan. Upset that she had canceled the normal family taco night in favor of a fish dinner, he was quiet during dinner, leading her to chastise him for not making more of an effort. He suggested that he talk with David Logan about candle-making, but Kate did not this fascinating dinner conversation.

Things seemingly hit a low point for Ben when he encountered D'Arcy Bloom, his old flame, on a bench in Patience's downtown. Finding her depressed, despite her recent heroic act in saving her friend Asta Twelvetrees and Vanderspeigle, he called her "amazing," saying that she wasn't afraid of anything and that he wanted to be more like her. She unexpectedly kissed him and he pulled back, reminding her that he was a married man. He then headed home, wondering how he was going to explain the incident to his wife and sure that divorce was on the table. Upon arrival at the front door, however, he heard sounds of intruders inside his home. He called the sheriff's office, but realized that they would not get there in time. He managed to make his way into the home and was poised for action as he discovered that it was "Sarah and Dick Houston" who had broken into the home and were threatening his son Max and his friend Sahar at gunpoint. Together with his wife Kate, who had escaped from being locked in a cousin, he delivered the two agents an epic beating, forcing them out of the home. Sahar praised him and Kate as being like "Daredevil and the Black Widow." In the aftermath of the arrival of Sheriff Mike Thompson and Deputy Liv Baker to take a report, he and Kate got turned on and kissed, then began passionately making out. Thompson reminded them that they had a room upstairs, but they were lost in the romance of the moment, finally seeing eye-to-eye and appreciating one another.

"Sometimes I think about being a kid again. It makes me feel good. It's better being a kid. Sometimes."
- during a counseling session with Harry Vanderspeigle, "Homesick"


"You're still sitting with me.
"Yep."
"So I also wanted to ask you what you are doing tonight."
"(in his head) I was thinking of chopping up the body in my freezer. Spring cleaning."
- Mayor Hawthorne and Harry Vanderspeigle, "Birds of a Feather"


"I will take your silence as a "yes" and see you at 6."
- Mayor Hawthorne to Harry regarding his dinner invitation, "Birds of a Feather"


"I-I wish I was like you. I'm terrified of pretty much everything. But sometimes I look at you, and... you're so fearless. It makes me feel, I don’t know, less scared."
- Mayor Hawthorne to D'Arcy Bloom, "Heroes of Patience"


"Good evening, sweetheart. Oh, yeah, day was good. What's for dinner? Divorce? Great."
- Mayor Hawthorne, talking to himself in the aftermath of his encounter with D'Arcy Bloom, "Heroes of Patience" 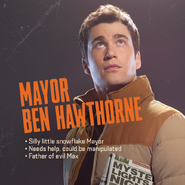