Our community needs more information on this page! Can you help out? Click here to add more.

Prior to Resident Alien, Maughan was best known for her roles as Maggie in Me, Myself and I (2017-2018) and as Victoria King in Bajillion Dollar Propertie$ (2016-2019). In 2019, she appeared in an Aviation Gin ad, a comedic response ad to a controversial Peloton commercial, as a friend of the "Peloton wife" character.[1] 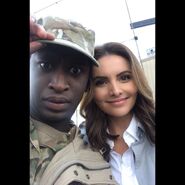 Alex Barima and Mandell Maughan, season 1 behind the scenes