Max Hawthorne is a character in the science fiction comedy television series Resident Alien. He is portrayed by Judah Prehn.

Max Hawthorne is a schoolboy who lives in Patience. He is able to see through Harry Vanderspeigle's human form and is greatly disturbed by him, at least at first. His bedroom is filled with paraphernalia related to aliens and outer space. He is the son of Ben and Kate Hawthorne.

He is one of only one in a million humans who is able to see through the molecular reconstruction process used by the alien's species to assume another identity, thanks to a genetic mutation. Vanderspeigle finds it uncanny that someone like him would be present in a town of only a thousand people.

His mother is a teacher at his school, which has led to him becoming something of an outcast, and his public claim that Vanderspeigle is an alien has not helped him either. He has also taken to wearing tinfoil hats, believing that it can protect him from any mental powers that the alien might try to use on him.

Max Hawthorne is out in the downtown of Patience, Colorado with his mother, Kate, when he sees Harry Vanderspeigle emerging from the town clinic. The come face-to-face and Max immediately screams upon seeing Harry, racing for the family car and locking himself inside. Kate is puzzled by her son's strange behavior, but Vanderspeigle immediately recognizes that Max is one of the one people in approximately one million humans able to recognize him as an alien by seeing through the molecular reconstruction process used to create his alien disguise.

Following a night of drinking, Vanderspeigle's thoughts turn to the boy and he decides that his only solution is to kill him in his sleep before he becomes a problem. He sneaks into his bedroom and proceeds to try to kill him, but is unable to prevent him from screaming, sending his parents, Kate and Ben, into the room. He hides under Max's bed and manages to evade detection, as the tired parents, having heard one too many stories of aliens under the bed, think that Max is just imagining things from having watched too many scary movies. The two allow Max to come with them to sleep in their bed and Vanderspeigle gets away. As Max's parents escort him out of his bedroom, Vanderspeigle gives him the finger.

Not long afterwards, Vanderspeigle assumes the role of the new town doctor. He is told that his first patient is waiting for him in the exam room. He heads there and pulls back the curtain, to reveal Max, who screams. "Yeah, this is some bullshit," agrees Vanderspeigle.

Annoyed at once again seeing the boy, Vanderspeigle makes another cursory attempt to kill him, but he runs away and hides underneath a bench outside. When confronted by his parents, he tells them that the doctor is an alien and warns them that he'll kill them too if they don't get away and protect themselves. Once again, the two do not believe him, but Max adamantly refuses to return to the clinic. Exasperated, Ben finally agrees to take him with him to his office, but warns that he's bringing him back if his throat doesn't get better.

At the office, the topic of discussion is the recent murder of Sam Hodges, the town doctor that Vanderspeigle has replaced. Hearing everyone talking about, Max tells the sheriff, Mike Thompson, that it was Vanderspeigle who killed Hodges and that he's an alien. Thompson, a highly-strung man, is not impressed, certain that Max is just making up stories. He asks Max if he has HBO in his home and suggests that he binge-watch the first season of Oz, then come back and tell him if he wants to go to prison. He leaves him with his deputy, Liv Baker, who apologizes for Thompson's attitude, commenting that Thompson is merely a big teddy bear... with severe anger and control issues. Max is unimpressed, whining that Thompson didn't believe him about the alien, that nobody does. She suggests that the alien is putting up some some sort of mind shield that only he can see through. He agrees that makes sense and she tells him that she's a sketch artist and could draw a picture of the alien.

Baker draws the picture and, using it, Max creates a number of wanted posters and begins posting them around town. Vanderspeigle sees the posters and is aggravated, ripping them down, but decides that Max isn't going to just go away and he needs to try something else. He calls up Max's house in a high-pitched voice and asks to speak with him, pretending to be one of his classmates. When Max takes the phone, however, he realizes that he doesn't recognize him from school and calls him out of on this. He then changes his story, claiming to be a "post office man" who saw one of his posters, but Max sees through this story also. Frustrated, Vanderspeigle curses at him before hanging up.

The next day, Max falls off his bike in the driveway and scrapes his leg badly after Vanderspeigle cut the brakes on his bicycle. His father Ben takes him to the clinic, where Vanderspeigle apologizes for his loss, not seeing Max at first and believing incorrectly that he killed him. When Ben, however, reveals that Max, however, only needs stitches, he is irritated. The two have a fraught conversation in which Max puts on a show of obeying the good doctor for the benefit of his father, while at the same time telling him in a whisper that he won't be a good boy and refusing to allow him to administer Novocain to dull the pain. Max therefore sits and takes it as Vanderspeigle stitches up his wound, even boldly suggesting that he might need more stitches and likening the pain to a mosquito bite on his arm. Finally all stitched up, Vanderspeigle warns him that something horrible could happen to him if he's not careful, but Max simply tricks him by telling him his shoe's untied.

Someone who believes[edit | edit source]

Max's mother Kate pays a visit to Vanderspeigle, asking why her son is behaving why he is. At first, he thinks that she believes her son's story, but after realizing this is not the case, suggests that it might be neglect. Kate agrees that this could be the case, saying that it's hard for her son, having a teacher who works at school.

That morning, Max is bullied in the halls of his school by students who have seen his posters and think he's some sort of freak. They ridicule his claim and knock him to the ground, another of them also bullying a Muslim girl named Sahar, knocking her Trapper-Keeper out of her hands. Seeing her being bullied, Max walks over and picks up it for her.

At lunch, Max sits at a lonely table. To his utter embarrassment, his mother approaches him, telling she just wanted to stop by to see how he was doing. Mortified, he asks what she's doing and even offers to pay her to go away. She then exacerbates the situation by giving him a hug before leaving, causing everyone to again begin ridiculing him, recognizing him as the boy who put up the posters. As his face burns, Sahar comes up and sits in the seat across from him. He asks if she wants to make fun of him too, but she replies that she doesn't, that she believes him.

The next day, the two visit a cafe where Vanderspeigle is having lunch. Seeing him, Sahar agrees with Max that he's disgusting, and definitely the person who cut the brakes on his bike. She then tells him that she's going in for a closer look. Max watches in astonishment as she approaches his table, then knocks over his drink cup. She and Max then race out of the cafe together, leaving Vanderspeigle to wonder "What the hell?"

Dinner and an apple[edit | edit source]

Max's parents sit him down for a talk, offering him cookies. Convinced that they're about to give him bad news, he comes to the conclusion that they're getting a divorce. To his shock, they tell him that they're not getting a divorce, but rather that they've invited Harry Vanderspeigle over for dinner. Hearing this, he races into his room, screams, and then radios Sahar via walkie-talkie and tells her that his life is over. When he tells her about the dinner date, however, she says that it's good news. She says that he's been wanting to get into Vanderspeigle's cabin and that she has a plan.

When Vanderspeigle arrives for dinner, Max plays the role of the good boy, dressing in his Sunday best and acting as though Vanderspeigle is a prized guest. His behavior confuses Vanderspeigle, who doesn't know that while Max is being nice to him, Sahar is busy stealing the keys to his cabin and having copies made. As the dinner comes to a close, Max tries various stall tactics to get him and his guest, D'Arcy Bloom, to stay longer, including reading a school book report. Finally, the two leave, despite Max's best efforts, but Sahar reveals that Max that she was successful in their mission.

The two then bike to Vanderspeigle's cabin, though on the way there they are stopped Sheriff Mike Thompson for failing to signal while turning. Thompson sends them on their way with a warning, complimenting them on being outside and getting fresh air instead of staying at home being glued to screens. The two arrive at the cabin and make their way to Vanderspeigle's basement, where they discover pieces of metal, a padlock on his freezer, and most disturbingly of all, an apple floating over a saucer. When they reach out to touch it, they are blasted backwards and land unconscious on the basement floor. Vanderspeigle arrives home and discovers the two, the feels for their pulses and is disappointed to discover that they're still alive. He places them in duffle bags and takes them upstairs, where is disturbed to discover a woman who claims to be his wife.

"Is there a mosquito in here? 'Cause I think I just got a tiny bite on my arm." - Max, regarding the pain from Vanderspeigle's stitches, "Homesick" 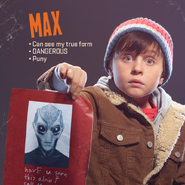 Add a photo to this gallery

Add a photo to this gallery

Retrieved from "https://residentalien.fandom.com/wiki/Max_Hawthorne?oldid=793"
Community content is available under CC-BY-SA unless otherwise noted.