General McCallister is the main antagonist of the science fiction comedy television series Resident Alien. She is a high-ranking official who is looking for aliens. McCallister is portrayed by Linda Hamilton and also by Alix West Lefler as the young girl Eleanor Wright.

General McCallister is officially described as "a high-ranking official who seemingly plays by the rules and runs a tight ship but secretly oversees a covert operation looking for aliens."[1] She seems to be rather high-strung, chewing out Lieutenant David Logan for saying "little green men" and suggesting that the pressure is getting to him when, in fact, she was the one who said "little green men." This, however, turns out to be a cover for her to hide the fact that she knows that what Logan is saying is exactly right. Afterwards, she secretly approaches him and admits that there was, in fact, a crashed spaceship and tasks him to find it and its pilot, pairing him with Lisa Casper in the role of his "wife." She is determined that the truth of the discovery of an alien by the military not be sucked into a "classified black hole." She is willing to use extreme methods to achieve her goals but states that she is not a member of the "men in black," claiming that if she had wanted them involved, she would have told her superiors what she was doing. She also tells Logan that what is happening is bigger than anything he could imagine.

General McCallister is a straight-laced Caucasian woman of middle-age with a furrowed brow, close-cropped haircut and a military uniform.

As a child, McCallister, known at the time as Eleanor Wright, was watching television with her father inside a lighthouse. An apparent storm disrupted the reception on the television, but much stranger still was the sudden stopping of all of the clocks. Then, the power goes out. She and her father make their way to the roof and discover the lighthouse's light has gone out and then suddenly the rain simply stops. Looking out into the sky, the two see a massive alien spaceship and McCallister returns with a camera, snapping numerous photographs, which blow away in the wind.

As an adult, McAllister is present at a briefing by Lieutenant David Logan, in which he reports something truly odd. He reports that fighter pilots in the strait of Hormuz engaged with an unidentified aircraft, which vanished into thin air. He then picked up the same signature over Colorado and as far as he knows, there's only one explanation for that, teleportation. He continues that the aircraft lost altitude and he believes it crashed over New Mexico. Hearing this, she asks him if he's talking about "little green men." She suggests that he's being overwhelmed by pressure and suggests he needs medical leave. Not knowing what else to do, he tells her "Yes, General" and exits the room, heading back to his car.

McCalister then follows him and surprises him at his car. She tells him that he's exactly right, that the vessel is an alien ship and they all know it. She orders him to investigate off-the-books, as otherwise the evidence will all be swallowed up and classified, never to be seen again. She then introduces him to Lisa Casper, telling him that she's his new "wife" and that the two of them are going to investigate together.

A few months later, McCallister arrives to meet Logan and Casper. "Where is it?" she asks them and Logan tells her "It's right here." Annoyed at not seeing any visible spacecraft, she warns Logan that she has spent decades searching for life on another planet and she won't have him play games with her. In response, he turns on a blue light, revealing the spaceship and starting to explain how the vessel's cloaking ability is neutralized. McCallister examines the ship in awe and compares it with her photo, but it is not a match for the ship she saw as a child. She then orders them to secure the craft and states that whatever creature was piloting the vessel will be coming back and she wants them to bring it to her.

Standing before the spaceship, Casper asks why they don't just use a crowbar to pry open the door. Logan counters that they've never seen this type of material before. Casper suggests dynamite, leading Logan to remind McCallister that Casper killed someone and saying that this is the sort of thing he was talking about. He asks her for more time and she agrees, but warns him to not make her regret it. Sometime after this, Logan again reports to McCallister, showing her ancient history books. He tells her of the ancient civilization of the Quimbaya and how UFOlogists believe that they were wiped out by extraterrestrials. He indicates within the book an amulet that looks just like the spacecraft, saying that he believes the alien is there to kill them all.

At some point following this incident, the group is together in front of the spaceship when suddenly the lightbulbs in the room crack and spaceship lights up green. Logan receives an indicator on a map on his computer monitor and reports that he knows where the alien is.

Logan loses the indicator on his map, due to the deactivation of the alien's device. With this lead lost, McCallister orders Logan and Casper to get back out into the field and capture the alien. Their journey takes them to Patience, Colorado, where they are tricked by the boy Max Hawthorne, who tells them that the alien is the "town doctor." They then capture Dr. Ethan Stone at the Patience Health Clinic, unaware that the real alien is Harry Vanderspeigle. McCallister then shows up, having been called in by Lisa Casper. Logan tells her that he got her the alien and he's officially done with Casper, describing her as "an unhinged psychotic." McCallister replies that she couldn't agree more as a team secures Stone. Logan asks if they're "Men in Black." McCallister replies that they're not called that, that he's been watching too many movies, but if she had wanted them involved, she would have called her superiors. "And then we wouldn't have an alien, would we?" she asks. Logan asks who "we" is and she replies that it's bigger than anything he could imagine, then says that he won't be there to see how it all plays out, ordering Casper to "get rid of him." Casper raises her gun, reminding him of her previous statement about having "different orders." Before she can fire, however, a group of civilians, including children, walks by. "Kill ya' later," she says, lowering her gun. Everyone then takes off, leaving Logan alone and confused.

65 days later, General McCallister also orders the abduction of a certain man who was already abducted by the Greys back on a bus from his parents in New York City around the early 1990s but then returned to Earth. She then meets up with Lisa Casper, where the two monitor the various individuals who are being held within their black site, some for as long as 31 years. Casper asks what she thinks about the latest one and McCallister admits that she's not sure yet, but promises to get to the truth about all of them. On that same day, she interrogates Ethan Stone and invites him to a formal dinner with him to have steak, potatoes and red wine. Ethan keeps trying to tell McCallister that he really is a genuine human just like her, but McCallister claims he's lying. She reveals that she is holding a vendetta against all alien life because it cost her her father's life, her father having committed suicide when nobody would believe his story about having witnessed aliens. She stabs Ethan in the hand with a fork, expecting that doing so will make him revert back to his alien form. When it does not, she leaves in disgust, telling him "You're a doctor. Fix it." Afterwards, she again meets up with Casper, who informs her that they've encrypted a signal of encrypted code with an alien signature. Unknown to either of them, the signal is intercepted by a radio built by the alien Harry Vanderspeigle.

McCallister sends Lisa Casper to New York to investigate the signal. Unknown to her, Casper discovers an alien egg, as well as Harry Vanderspeigle. When she confronts Vanderspeigle, however, he kills her. Not long after this, McCallister is contacted by David Logan. He has her meet him on a bridge inside a nature reserve and reveals that is in possession of an "alien ball" with unusual properties formed from Harry Vanderspeigle. He offers to turn over the ball to her in exchange for his freedom and an honorable discharge from the military with a full pension. Before he can complete his thought, however, he is shot by an alien sniper perched up above, causing him and the alien ball to fall to the water below. McCallister withdraws her service weapon and attempts to fire back, but only manages to barely escape with her life.

"No, I completely understand, this post comes with a lot of pressure, and there's no shame in admitting that."
- McCallister to David Logan, "Sexy Beast"

"The UAP is an alien ship. You know it. I know it. The Navy just admitted it. But if crash evidence goes up the chain of command, it will be swallowed up into a classified black hole. I'm not gonna let that happen."
- McCallister to David Logan, "Sexy Beast"

"Wait, are you... are you guys men in black?"
"Oh, would you stop it? They're not called that. You've watched too many movies. And if I wanted them involved, I would have told my superiors. And then we wouldn't have an alien, would we?"
- David Logan and McCallister, "Heroes of Patience"

"What do think about the new one?"
"I'm not sure yet, but I'll find out. I'll find the truth about all of them."
- Lisa Casper and McCallister, "Radio Harry" 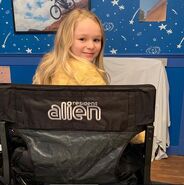 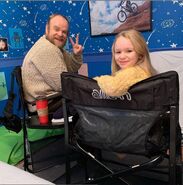